Warning: DO NOT GIVE GATORMEN GRENADES 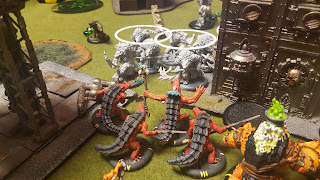 Because they will kill everybody.

Today was a great day. Firstly, new store! Went to Strategies and was super impressed with the place! Lots of product, clean store, and the staff was super duper friendly. They had 2 large tables for Wargames in the back, but only enough space for about 4 concurrent games. Thankfully, only myself and 3 others showed up for...

Whats Vengeful Deeds? Well, Privateer Press has story Leagues - Basically, a story is happening and there's special custom scenarios that people run through. And we get free stuff! In this case, a model - Draegyn, The Black Bastard:

For an old IKRPG model, he looks pretty not bad.

For this story League, first we do a Company of Iron match, and then a regular 75pt WMH battle.

The thing is - I'd never played Company of Iron until today! West was experienced though, and taught me how to play it quickly - And I really dug it! Ended up having a ton of fun, and definitely want to teach my friend Drew how to play it - I think he'd prefer the Skirmish style rather then a big 75pt battle. 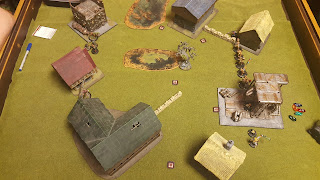 First up, our CoI (Company of Iron) match! Up against West's Circle Orboros, I decided to go for this list:


Maximus was the leader, and the rest were just helpful.

I was neglectful and didn't write down West's list, but it had a Blackclad Wayfarer, Wild Argus, Scarsfell Griffon, Swamp Gobbers Bellows Crew, and some lady with a stick. 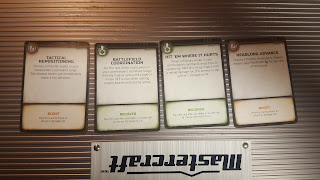 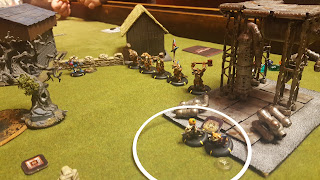 So, a couple things: CoI uses a card system, and pictured above you'll see my opening hand. Basically, you can use 1 of the 'top' abilities per round, and you can discard cards to use the bottom abilities.

I really liked this. It added a real interactive back-and-forth feeling, and added a level of 'YOU ARE NOT PREPARED' that I love about Magic. 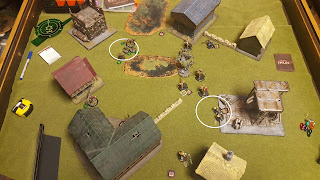 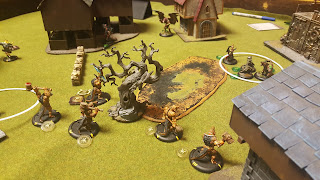 So, for this specific scenario, we were investigating this factory (and nearby town) for Research Papers for an alchemical weapon. There were 6 chips, and we had to collect as many as possible. Last man standing wins, too. So I focused on the objectives and went straight for the chips. See Maximus running away? Yeah, he was focused on gettin' dat paper. 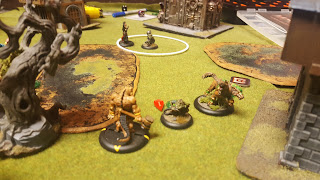 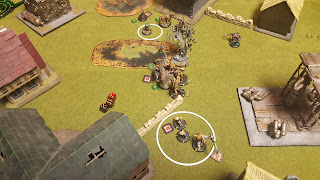 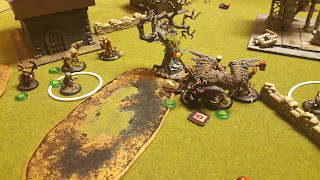 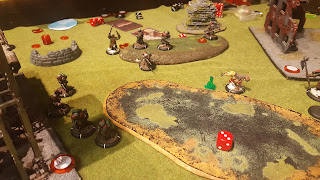 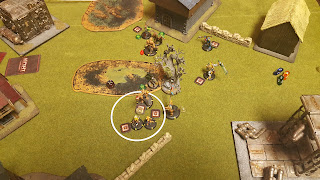 Gators had a commanding lead from early game, and I focused on collecting the Research chips - Turns out our tablemates (Jason and Jack) were focusing on killing eachother the whole time. 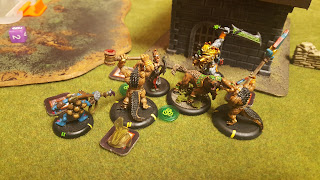 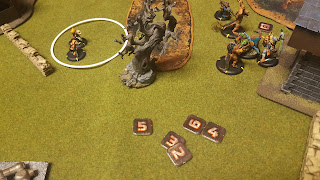 So many chips! But what does it mean?

Well, for Part 2, during the 75pt WMH game, the WINNER of this match (aka Gatormanz) gets Alchemical Grenades, that they give to one of their units.

Normally, these grenades are RNG 8, AOE3, POW 11, and the Blast damage is FULL POW, instead of half.

The icing on the delicious grenade cake? Well, if the total points on the research chips is greater than 11, then the grenades are that powerful.

The WMH game is gonna be messsssy. 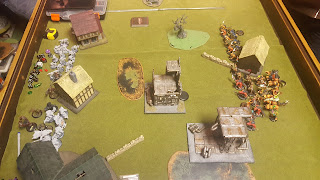 Since I won the previous CoI scenario, I am the attacker! I have a grenade cache - Shown by that Large base there. I also have one of my units (Red Posse) equipped with those devastating Alchemical Grenades I mentioned earlier. 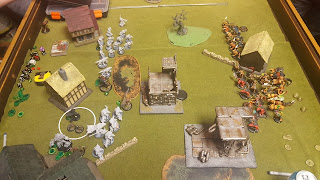 As the attacker, I got to pick table side, placement of grenade store, and I go second.

West's goal was to either kill my Warlock, or destroy the grenade cache. My goal was Warlock kill or kill 10 models with the grenades. 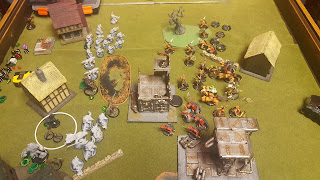 Moving up and I jam my gatormans up. The arena is tight, with lots of terrain - Which I love. And West's army has barely any ranged, which I also love. 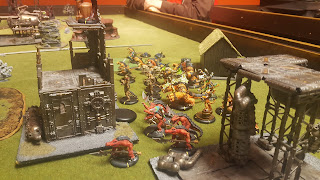 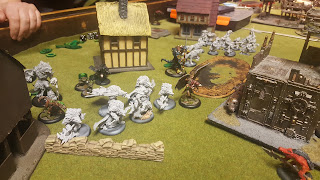 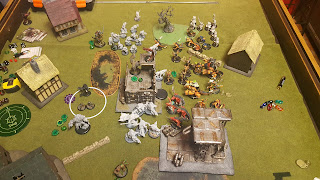 What I don't love - Is an ambush! At the top, one unit Ambushed and chunked my Gatormans. Warpborn Skinwalkers crowded into the choke point at the bottom, and two Puppers seek to block my other Gators charge lanes.

3 of the AOEs hit, completely creaming this poor buggers. 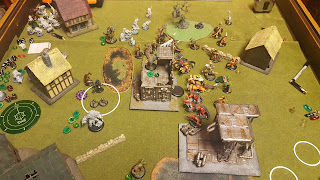 Oh, and Maelok feated. So at the top you see I ran in with Brown Posse and ate up most of the unit in the top left. Orange Posse fell back and cleaned up the unit that massacred my Blue Backline, while Wrastlers moved up to threaten. 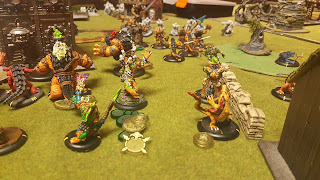 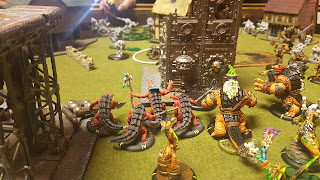 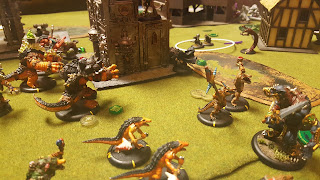 Tanith moves up to shoot some spells - To be honest, I think West's forces were broken at this point. The POW20 Alchemical Grenades decimated him, and pound-for-pound the Gatormans crushed his units. We shook hands after this, and I won this section of Vengeful Deeds!

Learning CoI from West was great, and hanging out at the new store was awesome as well. Overall a super fun day - I love Privateer Press's story Leagues, they're a super creative way to play a nonstandard version of the game. Really looking forward to cranking out the rest of Vengeful Deeds! Stay tuned!