First of Many - Legion Vs Gators!

Finally got to play a game against Sarah! Figure I may as well chronicle these too, from a perspective of teaching the game.

See, I really like teaching, but teaching methods between games can be very different, entirely depending on the game! And frankly, I feel that I didn't do a super great job of getting Drew (My newbie friend the Cryx player) into the game, and there's a few things about that that I want to address.

Hit the jump for some shoddy batrep pics, and yammering about teaching games!


So, when I first started playing with Drew, I did a very small point game for our first ever game - Of course, to teach. This worked out pretty well!

Aside from one thing - I was learning the rules too!

This was my first game of MKIII, and it had been ages since I had played MKII. I feel I stumbled by ok, but my knowledge was lacking in a lot of ways. This caused the game to drag on, and pause unnecessarily - This isn't fun.  When teaching people, you need to be super confident in your rules knowledge.

I've taught a ton of Magic, and I'm confident in my rules knowledge for that - So I guess factor that I hadn't appreciated until trying to teach a sufficiently complex game like WMH.

Anyways, later on, we had our first games of 2018 - Also with Drew, and I don't think he'd played except that other time. We did one more supersmall game to try to make sure he was refreshed, and then we dove in to a 50pt game - This was a big mistake.

See, this game is so freaking complicated - Just like Magic, but with spatial awareness and measurement approximations - Something that not a lot of people have as a regular skill! However, us nerds can almost all appreciate card game concepts like card advantage, making good trades, etc. But the basics, like movement and tabletop strategy? Totally lost on TCG players.

While our small game went smoothly, the 50pt was mostly Drew being overwhelmed with how much was going on on the table. So, for the future, when teaching people, it's important to let THEM determine the match size - If they want to do a big one, let them. If they want to keep their force super small and only add 1 model per game, let them! Talk it through and sort it out, and then I'll just build a list that hits the point value they reached, with probably 5 less points. Depending on the person, at least.

Oh, and rules confidence, Rules Confidence, RULES CONFIDENCE! I'd eventually like to be a WMH Judge/Pressganger  (And have MTG Judge Certification, but fuck that's difficult) and even though I've played a dozen games this year, I still feel I'm super green. If you're spending a lot of your game time second-guessing yourself, or drowning in 'wait is that right?' you can't focus on strategy; and you can't focus on helping the other person 'get' the game! Also, confidence in a rules system makes the game so much more fun to play, and when teaching a game, you want to be a big ol' glowy ball of positive energy 'FUN!' - If you're genuinely having a blast playing a game with someone, well, you bet your biscuits they'll be more engaged, and so will you.

Now, going in to teaching Sarah with all that in mind, let's see how our game went! 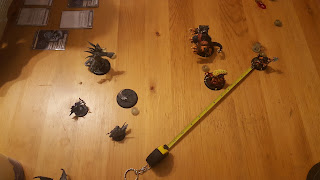 This won't be a normal batrep - I didn't take nearly enough pics, for one!

It was her Lylyth1, Carnivean, Neraph, and Deathstalker versus my Barnabas1, Swamp Horror, Blackhide Wrastler, and Croak Hunter.

I picked both of our armies - I figured a Warlock needs 2 Beasts, as they're really the backbone of the game, even at low point values. Then I just added a solo.

Enough models to show the relationship between Beast and 'Lock, to show that 'if you lose a beast, it kinda sucks' to inherently stress their importance. Solos (Both with Ranged) to show not only how Ranged attacks work, but also to encourage strategic positioning. This worked out well, as at one point she tried to deny me a charge lane using her Deathstalker once she realized he would be useless at knocking off my beasts.

For the sake of ease, I didn't even mention 'Feats' until much later in the game -  When it was down to My Wrastler vs Her Carnivean. While I mentioned it as a 'One time super powerful ability' when going over her initial Lylyth1 stats, I intentionally chose not to bring it up. Why not? Well, Barnabas' is nuts. Hers is good, but Barnabas would have won if I had used it. Also, Warlocks have so many abilities on them (Spells, Animi, other special rules) that compounding it with one more thing can be too much. That said, a thing I could have done better is remind her of it at a critical time for her - Maybe when she did her charge with her Carnivean on my Beasts? Not sure, but I'll keep in mind 'timely information' for next game. 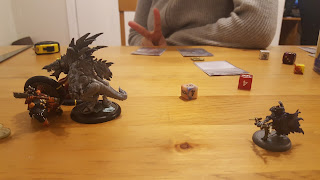 Great news, though - She did end up winning! Lylyth can get a lot of damage in, and she is very meaneuverable - Her Pursuit spell was super handy to keep her safe from the Wrastler.

Next time we play, I'm definitely putting her against a unit of Gatormen. She got a unit of Blighted Ogrun Warspears, but she really doesn't like them, yet - I have a feeling they'll be crazy useful with Lylyth1's Parasite+Feat damage. Regardless, showing her how a unit works will be important information for her to have. And I definitely think she's ready - She crushed me! So Rude.

So that's a bit of a writeup for that! We had fun playing, and I'm really looking forward to more matches against Sarah. Teaching her Magic was great, and it'll be sweet to have her engaged in a game that has a more 1v1 style. I'll get a ton of practice against Legion!