After my Steamroller performance last Sunday, I decided it'd be good to play Maelok a bit more - He was the caster who got me into the game, and frankly I did terribly with his activation orders last week. I'm sure I could have had a win vs those Mercenaries if I had just used Mortality properly.

Anyways, I sat down against Todd and his CoC again - The same list that JagaJaga went up against the other week!

Unfortunately, I thought I must have written the list down then, but it turns out I didn't... Ah well! I'll have to get it off of him next time we throw down.

These CoC are a nightmare to play against, but I really enjoy playing against Todd, so I'm determined to (eventually) crush their robot guts.

Hit the jump for pics and smushed gator guts!

Along with 2 Battle Engines, some punchy robots, and lots of little floaty jerkballs.

Since I wasn't happy with my repeated fuckups of Blind Walker on Sunday, I switched him and Snapper out for another Wrastler. This way I'd focus on using Soul Slave a bit better (No good reason to have him chill in the backline) and worry less about the big bulky Blind Walker getting in the way. 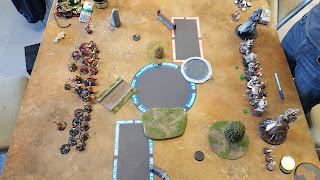 Todd went first, I picked table side - pretty happy with the side I picked, as that forest at the top is really the only terrain piece that annoyed me, whereas controlling that hill at the bottom helped me get some defense versus the ridiculous sprays from the Battle Engine. 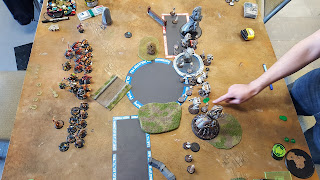 I picked this scenario because I got fucked on it last week, vs Erin's Kolgrima. I had only done this scenario once and really wanted more practice at it. 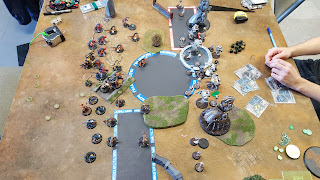 Spreading out on the approach - Normally I think I'd want to put the Posses together to make a flying V shape, but against all of those sprays? Nty. Spread the net! 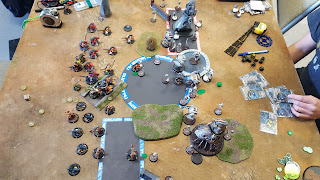 By only putting a couple up front, and keeping the backlines spread out, I was preparing to make a secondary strike with at least 2 Posse units, and hopefully only lose half of the initial lines. 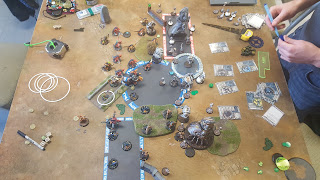 Feat turn! I was torn between saving it for an assassination attempt, but figured that putting my Posses up to 22ARM would be good to help me survive. 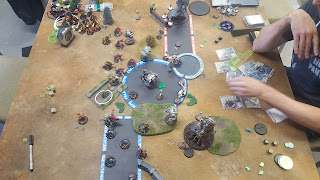 And there goes his feat - +2 Str, +2 Spd for his army, -2 Str and -2 Spd for my army. Oh, and I can't Charge/Trample/Prance, which sucks. He cleared a bunch of my Posse out with boosted damage rolls - I was 'smart' (totally unintentional) and didn't kill his orbs, so it didn't enrage his Punchbots, else it woulda been worse this turn. 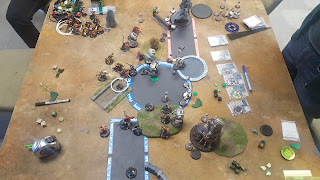 Ended up walking up and doing my best to jam - He was ahead on scenario points, and there was no way I'd be able to get a Wrastler up to do enough damage. 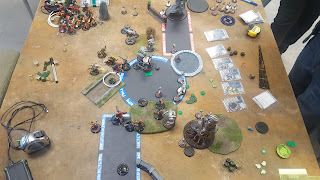 Way to win? Damn Punchbot threw my Gatorman away from their flag so he could get +3 Scenario points and win.

Learned a few things this game - For one, I had a hard time keeping my damage tracking straight on the War Room app for my variety of Posses. I'm confident I did it right, and it's the apps fault - But, in my 12 years of being Tech Support, I've learned that 99% of the time the issue is the user. Maybe I'll print/draft up some Posse Hit Point cards so I can keep track of them correctly (Colour coding!?) and use the app for everything non-Posse.

How I played the scenario - Well, I'm not unhappy with my strategy. I got screwed by my dice a lot, and it seems I just couldn't damage them. Really frustrating - I guess I got used to Rask dropping Fury and making my Posse 16P+S, ugh. I'll just have to try Maelok more to learn how to play his list, and then I'll learn when to pick which list.

Now, I really should stop procrastinating and go finish that Skink Raiders unit I've been meaning to paint. Til next time!