But taking away the Flying Gators tactic, it hurts. It was hilarious! Chuck a Blackhide down the table!? He Rises, charges the enemy Warlock and/or generally causes disarray by suddenly being a heavy in a backline!? Seems amazing(ly risky)! Fun for the whole delicious family!

So, when I read Skarath and thought that "Can't be knocked down" means he walks away unscathed (well, damaged) from a throw.

I knew this long enough to win a kitchen table match against my buddy Drew, and then after re-checking the rules after I realized...

Hit the jump for a riveting tale of rules fuckery!

So, another funtimes kitchen casual game with Drew. We used index cards as rough terrain, 2 square forests, and the lovely cobblestone mat.

Drew went with a lot of units - He wanted to try everyone out and see how they play. Unfortunately, my rules cheatery ended the game before any of them could do much.

Btw, I might edit in our lists later, but frankly I'm feeling lazy right now. So just a post it is! 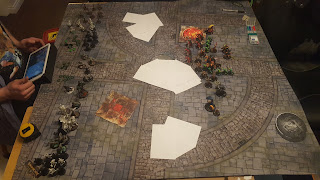 Ain't nobody got time for deployment pics! 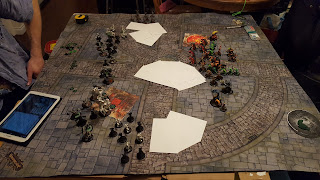 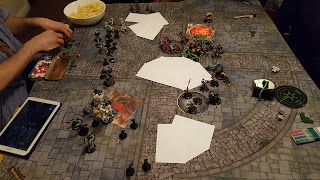 Oh, worth mentioning - See the Swamp Horror, top right? Actually an Ironback Spitter. Despite having just finished the model, I forgot it. Ah well. Swamp Horror-turned-Spitter got to spitspit on some Satyxis, while the regular Spitter spat on some Mechanithralls! I like to think that Drew learned an important lesson about threat ranges of my ONE viable ranged model. 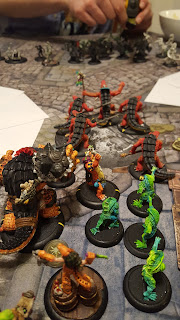 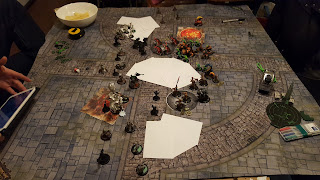 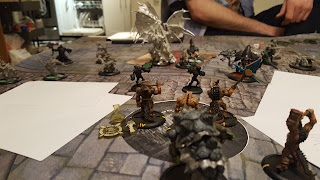 "Shit, my Mechanithralls were dead - I was gonna sacrifice those to keep Terminus alive"

So, after figuring out I could do a flying snake, I did. 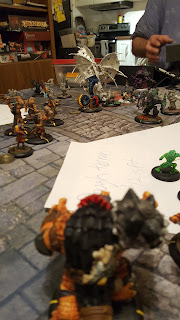 By figuring out I mean sort out the rules of it all. I guess I still could have throw him, he could have forfeit movement and I could have done his spray? Instead I was a wanker and he just chargeslithered on over and ate face. 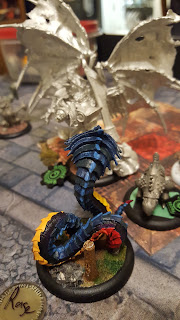 Oh, he was Raged too. From Barnabas. Much chomp.

I really wanted this Snake to do well, and my overzealousness with the rules interpretations cost me. Ah well. I feel especially shitty for doing this on a game vs a friend who is on game number 4 - Now he'll be afraid of inappropriate Flying Snake Assassinations. He says he won't, but I know - Once you get flying heavy assassinated, it's always in the back of your mind.

Anyways, we agreed that next time we play, we're gonna do much smaller point costs - It'll let him get more familiar with things, just like smaller games were my preference when I started relearning the game.

So, next time we game, look forward to multiple minireports with weird list inclusions! Whoo! A chance to test out my lesser-used models and units!