But we fought some Legion, piloted by Adrien!

Super stoked about this - Legion is the faction I would have picked if I hadn't learned about Maelok and the Gators, so seeing how they play in MKIII was something I've wanted to see for awhile!

Hit the jump to check it out! 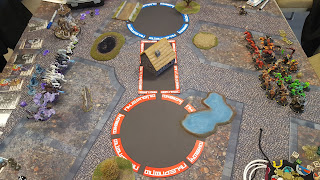 Battle lines are drawn! I deployed first, and put Totem Hunter way far away - After realizing how silly this is, I deployed him better next game. As we can see, he just put his biggest meanest baddest dude on that side. The Throne ended up being my Prey target. 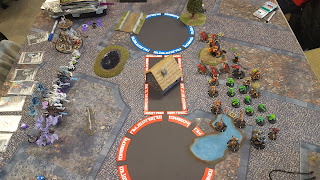 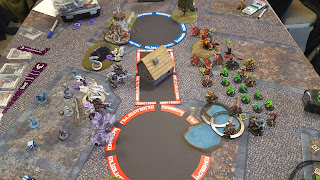 We start moving and I misunderstood Ravagore's threat range (Apparition + Slipstream + Movement + 14" gun = bad news) and ended up taking some shots to the face. The scather aoe doesn't bother gators too much, but it was kind of annoying. 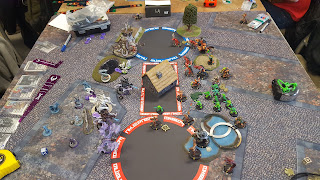 Moving up and here is where I feated - Not wanting to get shot by 14" guns again!


And we are engaged! Ravagore moves up and tries to point-blank AoE my brown GMP member, only to have it bounce back and hit both of them.


Smelling blood, gators swarm the T1000 Ravagore and ALMOST kill it! Also, we used Rask's Veil of Mists to take a chunk out of the house in the middle, and the Red GMP swarms through and lays waste to the solo that was hiding there, and chunks some damage into the other Ravagore.

Also, shoutouts to Spitter - I was thinking of doing an AoE shot at the T1000 to kill it + Feralgeist it, but decided to Aim+Shoot at the Ice Witches - This was a great call, as it melted them into a goopy pile of Nyss snot. 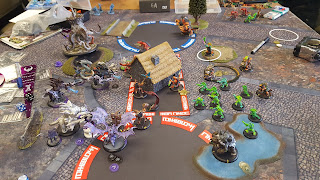 Ravagore pulls back a bit, and analyzing how far the gators are up the board, it's around here that Adrien admitted defeat, deciding he'd rather move on to round 2... But not before a valiant assassination attempt on Rask! 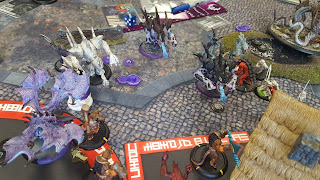 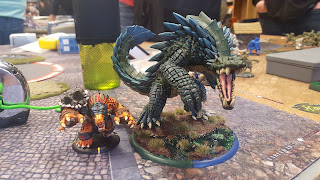 Another Minions player showed up! He was running Rask Superfriends and Maelok! AND HE HAD THIS! I HAD NO IDEA IT WAS SO BIG! ITS BEAUTIFUL! UUUGH

Guess I need to start saving up...

Anyways, on to ROund 2 vs Adrien's Legion!


After the first game, Adrien noted that Shooty List vs Rask isn't really a strong choice - So here's his other list! 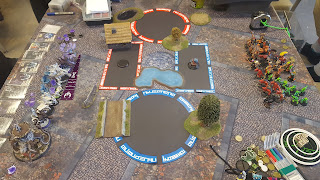 So, Absylonia is one of the Warlocks that Sarah was in to, and she seems pretty cool! The recent Primal Terrors CID that just released gave her some neat buffs - Playing God so she can spread her Mutation seems super handy, and Adrien used it really well. 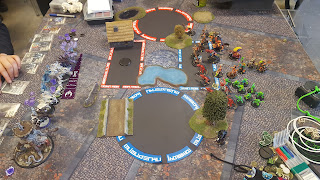 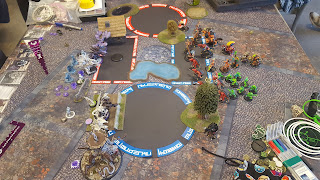 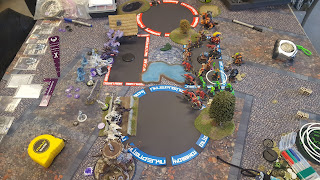 I think this was my big mistake. I feated, and kept everyone back. I figured I'd be mostly out of threat range, but if my first game taught me anything about Vs Legion, it's that their measurements are tricksy. I should have sent up some GMP to jam, instead of staying back, because... 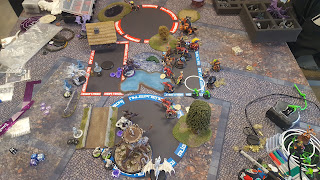 The front lines got hit by mega sprays, which killed a lot of important Solos. Gosh dangit. 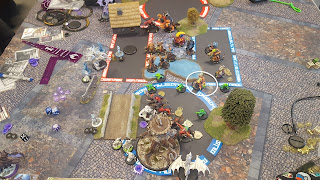 Gators made a valiant effort, but my 'wasted' feat turn really didnt do me any favours. 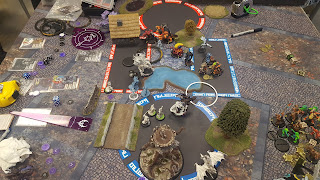 Absylonia's feat is brutal, too. Fully heals herself and Battlegroup? Ok. Well. GG... UNLESS I CAN GET THE ASSASSINATION

And then I rolled double-1's on my Charge Attack, and whiffed the next 2 claws. 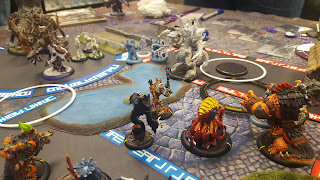 Poor Rask, ah well. He got murderated shortly after.

It was worth, though. I learned a lot this game, and really look forward to my next game against Adrien (Or Absylonia) and will definitely be better prepared!