Got a lot of painting done, and I wanted to test out my new models - So I threw them all together in a jumbled list and gave it a rip against a highly-tuned CoC tournament list!

AND YOU'LL NEVER GUESS HOW IT TURNED OUT.

Hit the jump for the battle report, and to see my amazing proxy Dracodile! 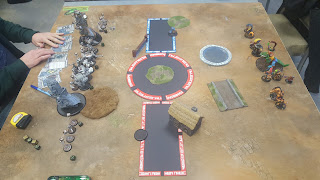 My list was super weird, it was Dahlia/Skarath, Wrong Eye/SnapJaw, DRACODILE (Played by Leatherhead from TMNT), a couple beasts and a couple solos.

Todd's list was those 2 big turret buggers who literally sprayed me to death, a few punchbots, and a lot of those little buggers CoC spams. 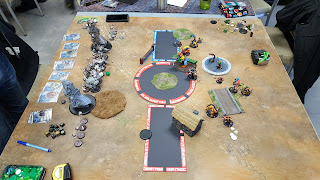 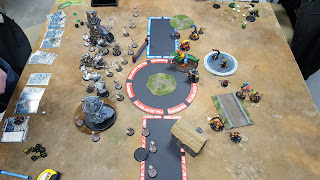 We've moved up and things are fine. I was hesitant on the engage, as we talked it out and I learned some things about Gargantuans:

They need to be protected.
They're a huge investment.
They are relatively fragile.

As such, I played super safe with him (And the list overall) and never really made much happen. 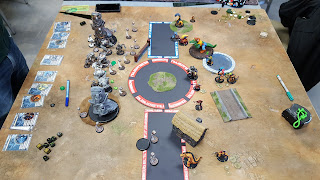 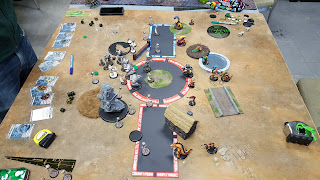 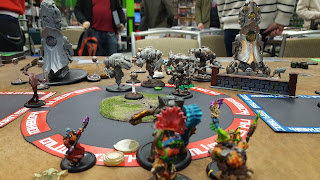 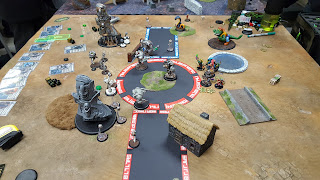 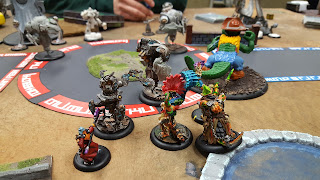 I really don't have much to say about the match, unfortunately. My list played terribly and I didn't even put a dent in him. His sprays blew me to shit and my Dracodile felt useless and vulnerable.

We talked and I think I'll try a Rask list for Draco, and a unit-heavy list for Jaga next time.

Wish there was more to say, but it was a blowout. On the plus side, I tried out Orin Midwinter, and I got to make some attacks with Leatherheadodile, so that was nice. 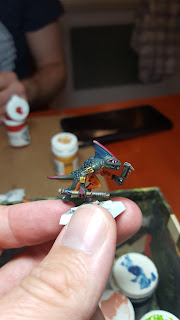 Next up, I'm painting Skinks!

No, I'm not getting into Warhammer - A friend hooked me up with 10, cuz I've always loved how they look. I'm going to use them as a proxy for Croak Raiders - I even did some greenstuff work to give them torches and oil bags! Stay tuned for the painting post, and hopefully some Battle Reports after this Sunday!