Down by the River


Alright! Had a game on Wednesday, against West and Kromac!

There were a couple people there with Legion armies too, but unfortunately I didn't have the time to get games in. Maybe next week!

And check out that Terrain! West said he was fine with extra water, so we dug out a river and he placed it running right through. Super fun!

Hit the jump for a Battle Report of this wet and wild showdown!

West's Kromac, Champion of the Wurm


Firstly - Look at that guy. Just look at him. Now that's a Warlock. That's not just a Warlock, that's a juggernaut of death and murder. Christ. Such an amazing model, and whoever painted that for West did a bang-up job. 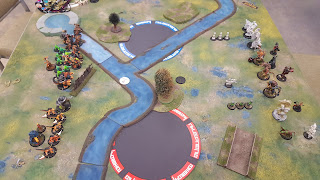 Battle lines are drawn, and it looks extra swampy! West suggested we throw some water down, and my ear-to-ear grin in response to West's "How much water is too much?" clearly answered. West crafted a fine river and I was happy to bleed out into it. 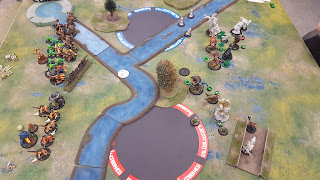 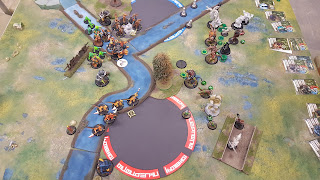 Moving up, the plan was the put most of my weight where most of Circle's heavies were going. Hopefully Skarath would handle anything at the bottom of the map, while Barney's Feat would Drop anything up top. 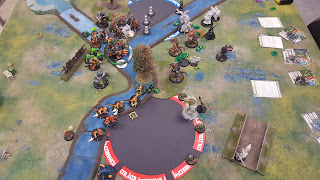 Things are looking okay here - Stones moved up to block the Brown Posse, pupper ran in to engage the Orange Posse, and things are generally setting up alright. 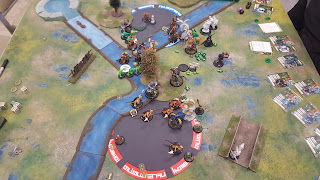 What happened to all the stones!? Well, one of Barnabas's new MKIII spells gives +2Mat and Vengeance! Unfortunately for West, he bonked the Brown GMP and they smashed the Shifting Stones out of their way!

Barnabas moved up, and got his feat off, which dropped a lot of the enemy army. Kromac and the Gnarlhorn stayed up (Due to animi) but everything else fell. Also, Kromac Feat'ed, to prepare for the onslaught.

See, the big problem here is my use of Warpath triggers. Notice how the Blackhide Wrastler (Obscured by tree) is back so far? Yeah. He pulled back after the Witch Doctor used Sacrificial Strike, removing a Posse member and finishing off Ghetorix. Dead Ghetorix is good, right? SO Blackhide pulled back to be safe.

But what about Barnabas...? 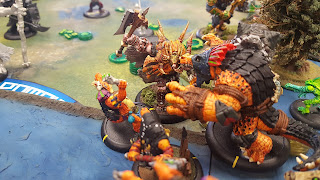 Barnabas was not safe. At all. Also, Kromac is a terrifying monster. He charged in and slapped Barney around like a rag doll. It was vicious and pretty ruthless. Super awesome though!

So y'know what I learned? Pay attention to your damn Warlocks placement. This wasn't even involving any Circle movement shenanigans, this was me being bad at my own movement shenanigans and opening up the perfect lane for Kromac to walk up and bonkbonk my Barney.

Ah well. Playing against West is fun - His rules knowledge is solid and I feel like I have more of a chance - Probably because of the delicious living models!

Anyways, this all occurred last Wednesday - Better go do my writeup from today's matches - 2 against a Legion player! Stay tuned!

West here. This was a fun game and I honestly love having that river through the middle, even if it really favors the gators. I mean, where else would they fight? Finally, beware Kromac. Dudes a bad motherfucker!