Robots and Wolves, Oh My!


Exciting times today! Actually got 2 games in, and NEITHER WERE AGAINST CRYX!

Today I got to go up against Convergence of Cyriss (Piloted by Todd of Rain City Hobbies / Toad Painting ) and Circle Oroboros (Piloted by West of... Idunno, he had a Texas hoodie on I think?)

Criminy - Todd warned me, he said their names are ridiculous. And he was right.

Also, to note - I have an UNPAINTED MODEL! :O As a rule, I don't use unpainted models. But I just picked him up today, and was super stoked to get some games in with him - The Soul Slave! Maintains an upkeep for free, and can cast one of my Warlock's non-Upkeep spells for free each turn! I played him twice today and got WAY more use out of him than my Bull Snapper has ever been.

So, Todd warned me how a lot of his things have ranged attacks - Ok, spooky. Apparently, some of them can even arc backwards in a straight line back to the attacker, lighting up everything in its path. Pretty vicious, so I did my best to not have my army too deep. Afterwards, we talked, and discussed how I could better lay out my starting line-up - More of a V, less of a I .

So Todd is a professional painter (Check out the links above! Do it!), and does some amazing stuff. This is the new scheme he's going with for his CoC - Blighted! I kept calling it Infested, because, come on, that's totally Zerg Creep chunking up the guts of that robot. But I guess in the Iron Kingdoms then Blighted would be the closest thing. Super duper cool though! Can't wait to see the rest of the army get done up! Really inspirational for me to try to start working with green stuff. 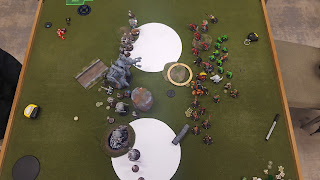 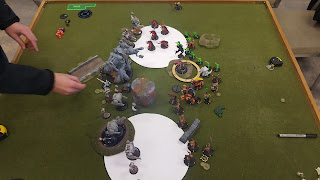 See, despite Rask's rad feat, that doesn't really stop things from just walking up and shooting - On top of that, his Modulators get to move back AFTER shooting... So, I tried 2 things.

The Brown GMP (foreground) decided to hang back, and not charge and jam up, so I could see what'd happen to them... While the Red GMP (background) jammed in, and even though Todd kept out of my Charge range, I did my best to get close enough to engage a few of them.

I mean, it was a slaughter anyways, but at least this way Gators got to Gator. 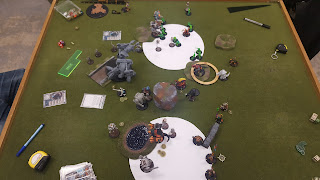 Most of the game was spent trying to keep my Heavies safe, to try to get damage in later, but they never really had a chance to get there... The Red Wrastler  hid in a forest the whole time, the Swamp Horror just chilled, but the Big Wrastler DID get a chance to run up and severely fuck up a Modulator... But alas, it wasn't enough. 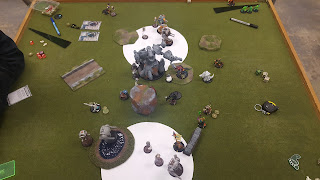 See, Todd was practicing for Lock & Load , as such, was trying out a fairly competitive list. He had answers for everything! Mostly, answers for me. I conceded the match, as most of my things were toast and there was no way I was gonna be able to take back the match. 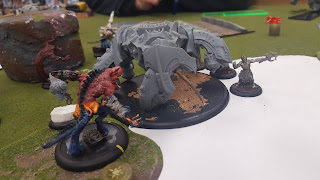 But at least I could try to take down a  Colossal! Rask threw Fury and Rage on the Wrastler, and he went to town, absolutely SHREDDING the Colossal! Took it from Full Health to Fucking Dead. Super satisfying, A+, would smash again.

CoC was super neat, and Todd was great to play against. Great rules knowledge, and clearly had plans for stuff turns ahead. Despite being a professional painter, I was kinda bummed his minis weren't dressed to the nines, but as he put it 'When you start doing it for a job, it's hard to do it for yourself', which I totally understand. Still, I'd LOVE to see more of those Blighted Robots!

After this, Todd was down for another, but I had a feeling that I wouldn't have been much of a challenge for his tournament-ready list - Besides, another player had been lurking around us, and this one actually had living models!

Next up - Circle Orboros!


Circle Orboros! Finally, some living models! A couple of 'em were painted, and the ones that were are beautiful! This Lanyssa is super inspiring, gives me something to aspire to when I saw mine off of her shitty plastic base and glue her to a proper one. 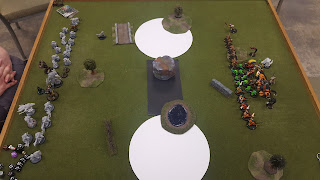 First game using a scenario that I 'picked'! Todd suggested a 'Roll For Scenario' app, so I downloaded it, and BAM! It picked a Scenario! Man, the future sure is great.

And y'know what I like about this one? No Control Flags! All I had to worry about was smashing faces out of Control Zones, and I really dug that. 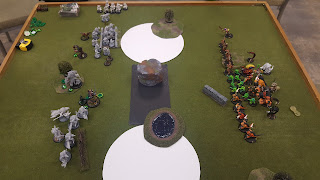 Here I'm trying a more central approach with my force - Keeping things central, using the Posses as a body wall to not only farm corpses for Gatorman Bokor, but also to let my Heavies move up without getting their faces shot in... Not that it mattered against this list! West was nice and after I told him my list, he picked the one that he said would be easier for me to handle. Next time I can go up against Kromac, heh. 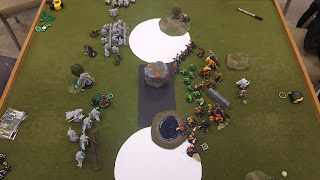 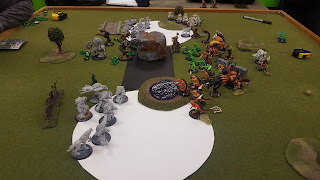 Gators moving up! See in the background, how there's no Totem Hunter in the forest...? Yeaaaah... Poor guy. Ambush is a bitch. 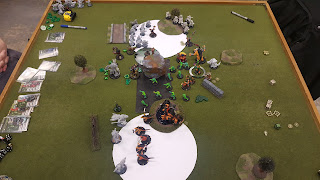 Here was my Rask feat turn. Kind of weird, as I jammed up my Gators, but it actually really helped save my backline from getting Magic'ed to Hell by Tanith using her feat (1cost Spells + Beasts become Arc Nodes). 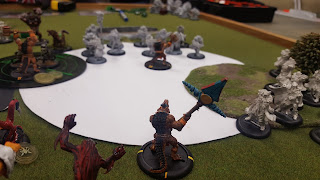 Brown GMP getting swarmed on! Seriously though, these guys were champs. SO MANY TOUGH ROLLS. OH JEEZ. Also, these Units just could not damage them. And even when they did? Kill a couple and GMP got their Snacking on! Man, fighting living models is GREAT! And Delicious! 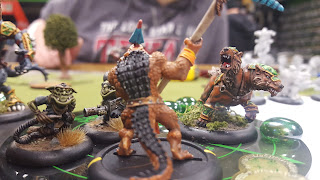 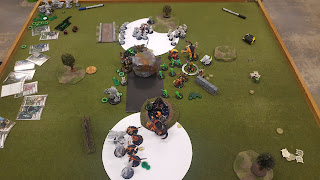 So, y'see that Lanyssa Ryssl? I really wanted her to die, so she did. If I recall correctly, I think it was a Sacrificial Strike from the Gatorman Witch Doctor.

See Loki there? The Warpwolf with the Hook and Shield and absolutely badass sculpt? 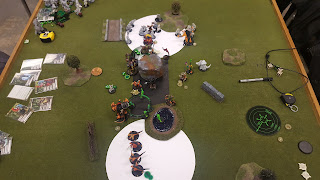 Well now you don't! He got da Paralysis and got ShRekt by the Wrastler. 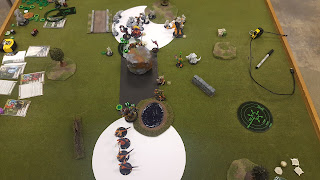 This next bit was great. So, the only things I had to worry about on the Control Zones were a Gobber (Behind the big rock) and the Warpwolf Stalker. I really wanted to Fury my Orange GMP, but couldn't wriggle Rask close enough without leaving my background Beasties out of my control range. 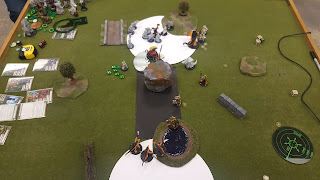 At this point, it was over. All enemy beasts down (Even Mini Cerberus) and it was a matter of chilling on Control Zones for 2 more points. West decided the best try was to hit up an assassination, so, let's roll up and see how it goes!

Suffice to say, she didn't make it. 9 Damage on Rask, and he still had a Fury to transfer away, along with Bog Trog Mist Speaker for a Call to Sacrifice. Still, it was a great try.

I really dug this one because Circle seemed super scary, and I think West just got wrecked on dice rolls. Meanwhile, I was rolling hot the whole time. Loki and Warpwolf didn't really get to do much of note, whereas their Units were great at jamming, but not really clearing things. Afterwards, West mentioned how he coulda popped Affliction on the GMP which held the background Control Zone, which woulda stopped the ridiculous GMP Armor shenanigans and probably started getting some points on that side of the table.

Super thrilled about first win! Stoked to have more games against West - Can't wait to see their Kromac list!

Next up - Gotta get some stuff painted, and gotta get more games in on Wednesday!