More Cryx it is!

As it shall always be, I'm up against Cryx.

I honestly can't complain too much, though. See, on Sunday, I headed to the store to get some games in, but everyone was playing some other game called Infinity. They're in the middle of a league season, so it's what's popular right now.

Turns out there's no hulking scaly monsters, so I ain't interested.

I killed some time at a nearby anime convention (yes, seriously. Vancouver, amirite?) and then headed back to the store to see if anyone was up for WMH.

Hung around for a bit, saw a lot of Infinity happening, so I was just about to leave when someone approached me - Gareth, from last match!

"Wanna fight more Cryx?"
"Not really, but happy to play!"

Wanna see what 9 Slayers can do to a Gator army? Hit the jump for the most HEAVY METAL match I've played yet!

Told you there were a lot of Slayers. 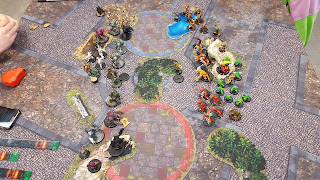 An uneventuful first couple of turns, as per usual. Gareth thoroughly warned me about the threat range of his Slayers, so I was cautious to try to not get too close. 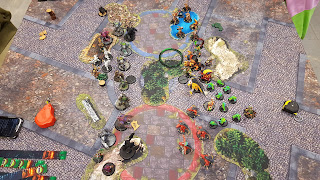 Here's where Rask feated, which makes my dudes untargetable from 5 inches away. Pretty handy against Charging Slayers. This part was tricky, because I really wanted to get aggressive and jam things up, but knew this was the turn for Rask's feat to be relevant.


Here we see Slayers doing what Slayers do - Slaying. Turns out that despite using Rask's feat, Slayers can still just walk right up to things and fistfuck them. Most of my Red GMP got ripped up, whereas the Brown GMP survived fairly well. One thing I failed to notice/address this whole game is Gareth gaining points from being in B2B with the Control Point on his side, whereas we see that he's jammed a Slayer right down my mid, denying me points. This eventually wins him the game. 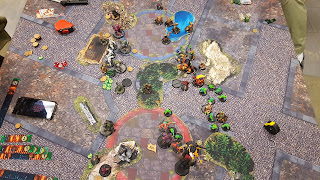 Blackhide getting some revenge for what was done to my Red GMP.


New Blackhide was brave, but got mowed down by these 3 Slayers.. Well, he seriously mangled one of them, which was great, but the other two weren't really a fan of his work. Bull Snapper continues to be friggin' useless. I really should stop bringing him in my lists, I don't think I've ever been happy with him.

Rage + Fury on Swamp Horror is devastating. Must remember this for the future!

So, I was feeling pretty good about things by this point - I had 2 heavies left, most of the Slayers were trashed, and I was advancing up the field. 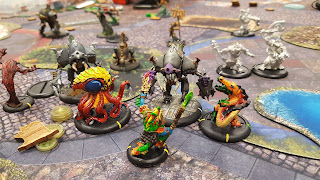 Then there's that thing I always forget about this game - It isn't about killing them, it's about those damn objective points.

So Gareth won on points, on account of me never contesting that point his Machine Wraith was parked beside. He suggested that next time, I run up Swamp Shamblers so that at least he isn't getting points on both of our turns. I think if I had done that, and had a couple extra turns because of it, I would have been able to clear the rest of his dudes and control some stuff.

As always, plenty of learning here - Blackhide Wrastler even got to throw a Slayer into another Slayer, killing them both!

Now, as a note - I know I complain a lot about Cryx. But y'know, I'm happy I'm getting the games in. That's the thing about this game - In Magic, I'll usually refuse to play against a Commander deck I hate (Zur, seriously, get fucked) but when it comes to WMH, I don't foresee ever turning down a game due to army comp. There's too many moving pieces and things that could be done to answer individual threats, and I think I just need to learn to address them.

Also, I want to mention that playing against Gareth is awesome. This guy knows his stuff. He hands out just the right amount of advice at the right times, so that I don't feel like he's trying to play my game for me, but also so that I don't feel like he's taking advantage of my inexperience. It's really great getting games in with him, even if it is just an Undead Clusterfuck.

That said, he told me about his Cygnar armies, and I doubt I'd even have a chance against them - So I'll try to bitch less and be happy facing off against Cryx.

Looking forward to games on Sunday - Will be picking up a Soul Slave too, which is gonna be an auto-include in like, all of my lists. Will have to think of some special way to paint him, or at least a fancy base... Hrmm...

Anyways, catch y'all next time!