And of course it's against Cryx!


Well, after fantasizing about finally getting some Gators on the table for the last couple months, I finally got a real game in!

Maybe one day I'll play against a force other than Cryx...

Hit the jump to see some horrifying (-ly well painted) spooks chow down on some zombie crocs!

Today I hit up Connection Games, and after hanging out for a bit, someone I recognized walked in - Gareth - Who I had played against back in February in 2015 . That's 3 years ago!

For once, I was sure to get pictures at the top of each turn - Super helpful for analysis afterwards. Gareth was super knowledgeable about the game, and really patient with me half-remembering most of the rules.

For some reason I kept thinking that Shamblers should go in front. After the game, Gareth and I talked, and he strongly advised that they stay back in the future. When they chill in the back, they can gain a bunch of corpses off of the dying Gatorman's, and become a big spooky blob of horrifying Bog Trog Zombos! 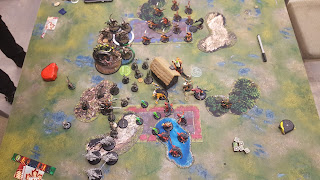 I think this is when I should have feated - Running into their back line and causing disarray would have been way more effective than what happened next - That being Skarre's Feat Turn.

Skarre immediately suffers any number of damage points. For each damage point suffered as a result of Blood Magic, one friendly Faction model currently in her control range gains +5 STR and ARM for one round. This model cannot spend focus points to reduce this damage.

Whew! See all the little red blobs? Yeah, that's how many of his models got buffed. They cleared out most of Orange Posse, none of Brown Posse, and half of Red Posse. Bog Trog Shamblers got massacred, but they left one alive (I guess to tell the tale?) and my Blackhide Wrastler and Blind Walker both got shredded.

Soooo, this is why I needed the feat the previous turn. Getting smashed by this really sucked, and feat'ing in response didn't give Maelok enough of an edge to make a difference after this point - +5 Armor for a turn makes things practically immortal against Gatorman Posse, and the Incorporeal on a massacred Gatorman army didn't help nearly enough.

After this, I scooped. Gatorman's got ground down by the Cryx, and after Skarre's awesome feat turn, there was no coming back. They really needed to jam up the back line earlier, rather than me holding them out trying to go for an assassination.

Still, I learned a lot, and the MkIII rules are pretty great - Measuring whenever you want is AMAZING.

Really looking forward to next week - Apparently more folks show up on Sundays, so maybe I'll be able to fight against Not-Cryx!