Or, anyone really, if people actually read this thing.

It's been awhile, but I'm back! And this time, I brought friends!

With the upcoming release of Mark III rules, a friend of mine decided he wanted to get into the game. Always down to support a friend (and crush them on the battlefield), I happily obliged to learn the Mark III rules with him.

Hit the jump for some Mark III musings, fractured battle reports, and a short to-do list for myself!

He picked Cryx, because he thought the models were cool looking. Being Gatormans (with just about every one of my cards referring to fucking up Living Models) I was a bit put off, but, whatever. Cryxians can re-die just like everything else can die, and Gatormans are really good at outlasting things.

Now, with the new rule changes, you might be wondering - Is the Citrus Shoal going to start including pigmans? And to that I say.... Maybe. Meat Thresher + Elasticity is too good to pass up, and some of the non-Gator minion solos are pretty darn decent (I'm looking at you Lanyssa), so I'm sure it'll be a matter of time before I start slapping paint on piggies. That said, I've got a backlog of Gator minis I've been acquiring over the last year, and not painting...

Let's get on with the BatReps!

Firstly - Meet Drew! Or, at least his hands, tablet and beer. He's the buddy I told you about.

Since he just started we're doing a 15 point game, which apparently in Mark III means 15+28points, because everything has hyper inflated point costs now, but whatever, we'll roll with it.

He picked Goreshade, the BASTARD, for the reason "Because he's a BASTARD", which is good enough for me. He also went with 2 bitey chickens, 1 spitty chicken, a flappy chicken, a pewpew ghost, and a NotADeathjack.

I really should write down people's lists in future games....

So this was literally Drew's first WMH game ever and my first Mark III, so MISTAKES WERE MADE.

Drew's NotADeathjack ran up, getting within range of my Wrastler, who then used Rage (New animus, not Rise, I'm OK with this), Charge, and proceeded to shit all over the NotADeathjack. It was glorious carnage, I tell ya what.

On the right we see that my GMP (Who only have 5 hit boxes now? PPress plz) also got in the face of some chickens, and they're wearing Barnabas' new Death March... Which is pretty awesome, giving the GManz a MAT boost is useful, especially when I DONT GET TO REROLL MISSED ATTACKS BECAUSE CRYX ISNT FUCKING LIVING sorry, sorry, I'll control myself. Ugh.

Anyways, the GMP successfully smashified the spitty chicken, breaking everything except one box on the damn thing.

After this round, I didn't take any more pictures, but Goreshade ran up, Barnabas Black Tided (KNOCKDOWN ALL THE THINGS), and my GMP went Gatornomnomnomicon on Goreshades' pale metal ass.

Next up, I went with a different 15 point list - Drew kept his the same due to collection size, of course. Hell, I remember my first 10 games were Barnabas, GMP, Wrastler, Snapper, and nothing else...

So the above picture is actually before things got bad. Here is where I REALLY should have feated with Rask, because I misjudged the chickens zoomfast leggers, and they got right up in my Wrastler's face. Also, Goreshade moved up close enough to matter, popped feat (Which summons a troop of Bane Warriors? Ok? Thats fair.) which all went ham on my Wrastler (Yes, he's a proxy, because the Kartikeya is too dope to not put into the army).

Now I think this was around my third turn. I deployed the Ambushers here, but you can't see the Bog Trog Ambushers on the right, because I have no concept of taking useful photos.

So after a chicken and a couple Bane Warriors charged Wrastler, Wrastler and I decided we were done with chicken in our grills, and we'd try out a Two-Handed Throw! After some intense rules learning, Wrastler hoisted the chicken up (Which is a hilarious mental image - Wrastler grabbing the chicken while it's stupid little legs flail helplessly) and chucked it clear across the battlefield, right into Goreshade's stupid face.

The Swamp Horror got engaged by a chicken, too, but... Man, I just wanna say, that the new Impervious (Opposing damage rolls roll 1 less die - Used to be only vs Ranged Attacks) is absolutely great. Swampie took 2 Bane Warriors and an angry chicken and didn't even give a bother. Fuckin' Impervious, man. He Critical Amputation'd a chicken, then crushed it with a tendril and a satisfying THWACK. Flattened chicken. 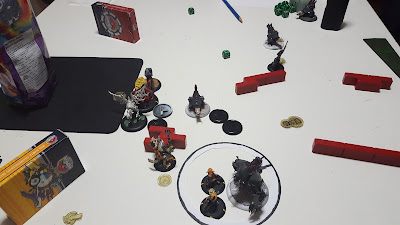 Bog Trog Ambushers got all in the face of NotADeathjack, but then the spitty chicken did his spitty and killed all of them. Lovely. So NotADeathjack charged into the Gobber cloud, which thankfully triggered Rasks's GTFO Admonition, otherwise it probably would have been game right there.

Goreshade got up and repositioned, chicken got up and killed Wrastler, flappy chicken got in Swampie's face, and then, on my turn, it went like this:

Rask activates, moves, pops Goreshade with Arcane Interference to get rid of that STUPID Lamentation which was making all of my spells/upkeeps cost double.

Then Rask cast Fury on Swampie, and then his new Veil of Mists, which is a 4" AOE cloud which gives my models in it Pathfinder and "can move through obstructions and other models if they have enough movement to move completely past them", which allowed Swamp Horror to shift through flappy chicken and lay some sick beatdown into Goreshade.

I'm sure this won't be the last time the Citrus Shoal goes against Goreshade and the Cryxian empire, and I'm super stoked for future matches. I'll get back in the habit of writing down better lists and taking pics at the beginning/end of each turn, but for now - We casual.


QUICK TO DO LIST BEFORE I CAN BUY OTHER MODELS:


Assemble and Paint Promo Gatorman Witch Doctor - The lady one.

Assemble and Paint Jaga Jaga - The fucking snake is a bitch to attach to her, and I'm incompetent at pinning... But I'll get there!

Assemble and Paint Gatormon Bokor, base the Bog Trog Shamblers - Shamblers are painted, but need to be put onto bases, and their boss needs to get done up.

Also, finish painting the details on your plastic GMP unit. Seriously, you're almost done. Just fucking.. DO IT

Alright, I think that's it for me. If anyone actually read this whole damn thing, comment below. Will do my bets to post every future match. See ya around!