Wednesday is a good day to die.

That's supposed to sound badass, not defeatist... Despite results of the day!

Hit the jump to see some pictures, while I ramble incoherently!


This was a great first match of the day. Painted army, looked great. Will have to get close ups in the future! I was worried about his Incorporeal Ghost Raiders, and I was right to be - They got really, really annoying. He had some living, with his Bloodgorgers, but they were also Tough, so that was hard to be happy about.


So this is when I used Rask's feat, which makes guys in his Control untargetable by ranged or charge attacks from more than 5" away. I tried to keep back far enough to prevent charges from his Mechanithralls and Bloodgorgers, and am pretty happy about my deployment here - What's happening in the forest is something I'm unhappy about, but it was to hunt and kill Raiders that had made themselves corporeal... I should take a picture of the end of each Turn instead of each round, heh.


Ghost Raiders are actually the worst, Rask shooting them and Witch Doctor stabbing them was really all I could do about them. The Desert Gators got wecked by BileThralls, who didn't hit their own guys because of Incorporeal... In the second picture there, on the Desert Gators side, all his guys are just jamming up that unit, so clutch but that one Gator contesting the Zone by himself. He deserved a Spiny Growth!


General Slaughterdick crushed a Bog Trog Uprising, my Red/BlueHide Wrastler  finally succumbed to the Mechanithralls constantly beating at his hide, and that Feast of Worms AoE (Purple Disc) was really frustrating. Rask is shooting Ghost Raiders left and right, which is cool.

Was doing really well, but unfortunately, Scaverous used the DeathRipper to arc spells through into Rask, and then the Pistol Wraith that was incorp (Bottom of images, might have actually forgot to get him in the pic...), and the day was won for Cryx.. Really good match though, so much attrition, and finally killed all of the Mechanithralls, which felt really good.


During the Cryx fight, Logan was hanging around and said he had just got his Pig army assembled, after he had played Khador aaaand another WM Faction (Should have written this down), so it was his first Hordes game, too!


First turns, just moving up! He learned how Fury worked like for the first two turns, and managed it flawlessly for the rest of the game. Really well done.

Really happy that his ranged guys up top are coming the closest, and that his Slaughterhousers are all spread apart, perfect for... BOG TROGS!?

I think he may have forgot about Rask's feat, because he looked seriously perturbed when I announced it happening. I was wishing I had Spitter on this list, as he has a lot of units. But, check it! BOG TROGS rushed in! Messed dudes up! Whoo! 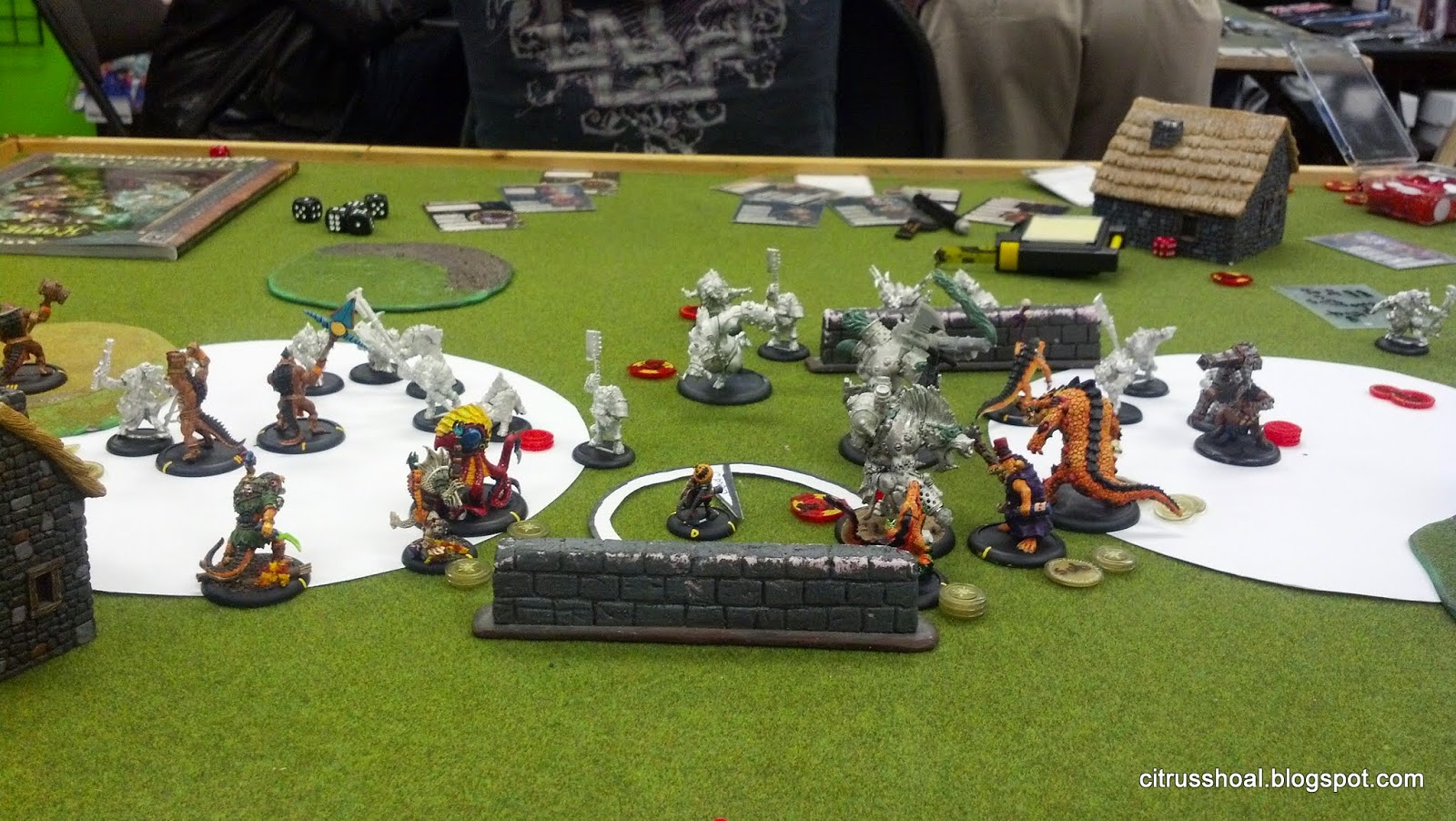 So, I really need to start taking pictures at the beginning of each TURN, and not each Round, because this is rough to analyse.. Basically, Wrastler over extended, he got Mega Charged by asshole Pigs, tough Brigands are challenging, but manageable. Bog Trogs got murdered, it was carnage.

Anyways, I figured I'd be able to assassinate with Snapjaw... Buffed him up, sent him in, learned how hard it is to attack someone through a wall (logically), and yeah. Should have attacked the two WarHogs, killed them with a super buff Snackjaw, and then worked my way to his 'Lock.


Totally misplayed, but that's ok - I learned about walls, about Pigs, and Gators got their FIRST taste of Bacon... Overall, a grand time.

The problem with this match is that it was being played at like 8:15 when the store closes at 9, so Bobby was stressing to move quickly, I kinda was/wasn't, but the catch is - It was his first game outside of his kitchen-table just friends matches, and he seemed super stressed. Would like to play again, but with less of a time constraint. He played a mean Menoth! Check out the armless Menoth fellas as flags - That's just cruel!

Acrobatic Judicator, balancing on the terrain (And dice!) . Taking firebombs on the Desert flank and feating to protect the orange flank was a good call - I think one of his Warjacks would have totally rammed the Orange Posse, and it woulda been rough.. Also, this was to protect them from the AoE Judicator Rockets, too, as I knew next turn, the Gators would be able to fan out.

Also, he forgot about the bog trogs! Sooo the bog trogs rushed but failed to kill either of those solos. Damn dice. :<

So, eSeverius' feat turned some Gators around, Desert flank got hurt hard too... I don't think I would have won this, as Judicator is terrifying, but I would have wanted to play it out, I think Rasks' heavies and Snackjaw would have wrecked some face... Spitter was really chipping away at the flamebomb jerks.

Anyways, might be playing Sunday - if I am, pics after every TURN,  not every ROUND!

Also, to anyone who actually read this:
Did you like the BattleCollege links on all the units, or the Privateer Press links (like in the initial Vs listing)? Let me know in the comments!